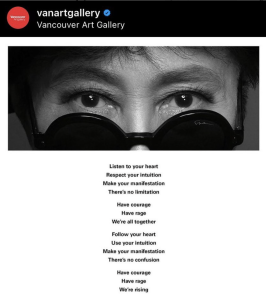 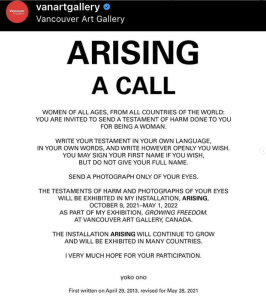 THIS IS A MUST-READ FOR WOMEN – ESPECIALLY WOMEN IN THE ENTERTAINMENT INDUSTRY.

If you think it is hard to read…just imagine living through all of it (and more).

This Arising Exhibit is an ongoing/evolving project by visionary artist, Yoko Ono that invites individuals who self-identify as women – of all ages, from all countries of the world – to write a testament of harm done to them simply for being a woman (along with a photo of just your eyes). All statements and photographs (of eyes only) will be exhibited at the Vancouver Art Gallery as part of the exhibition “GROWING FREEDOM: The instructions of Yoko Ono,” on view at the Vancouver Art Gallery from October 9, 2021 to May 1, 2022. It will then tour the world.

This is a call to all women who’ve been harmed simply for being a woman. Lisa Rhyne is eagerly contributing to this ARISING exhibit and will also be sharing her stories on other platforms. Lisa has never publicly addressed some of these things and the time has come to shed light on the full truth of these incidents. She shared a few of her experiences in “JOURNEY OF A DREAM MASTER” but there’s much more to be told!

Below is are a few clips from The Maury Povich Show. This is an older video from a VHS copy so we apologize for the poor quality. Lisa accepted an invitation by Maury Povich to be a featured guest on his show to discuss her nightmare stalker situation that lasted for several years leading to the climatic night when this crazed stalker broke into her home, held her hostage and savagely beat and brutalized her for over 4.5 hours.

A NOTE FROM LISA REGARDING THE MAURY POVICH SHOW:

“Let me clarify a couple of things. I was so wound up on this show, I could not speak or think clearly. There was so much I wanted to say and not enough time to share it all. A big part of my concern was that the show would contact this psycho and he’d be popping out onto the stage. I made it ultra clear to all the producers and Maury that they’d better not involve this stalker in any manner. They assured me they absolutely were not contacting him or the other guy that was mentioned on the show. They assured me that they had the safety of all the guest as an utmost priority. However, the entire show I just kept waiting and wondering if he’d show up (that’s the PTSD symptomology due to all the trauma he’d caused over all the years of terrorizing me).

On the show we talked about me “dating” this guy. That is not the case. This asshole saw me out at a club when I was working for the record label. He talked to me most of the night then asked me out to dinner. I agreed to go to dinner but agreed to meet at the restaurant (so he would not know where I lived because I had an odd sense about him which I SHOULD have listened to!).

So, talking to me at the club is Date #1. Date #2 was a few nights later at a restaurant where he professed his undying love and revealed all his big plans for us including me stopping my work in the entertainment business (because only whores who sell their soul to the devil work in show business according to this sociopathic terrorist) so I could be his stay-at-home wife. I made it super clear that I had no interest in any of that…and that is when all the trouble really started.

I have edited the show to only my interactions. I suffered from extreme Soul Loss (sometimes called PTSD – which is completely curable – see SHAMANIC SERVICES on the Services page) and horrific nightmares for many years after this terrifying ordeal. Now I am completely now fine and astonishingly adept at dealing with unwanted attention and stalkers. I know exactly what to say and do…plus being an expert marksman certainly helps my peace of mind. I rightfully earned the nickname “Annie Oakley” from the TBI agent who trained me.” ~ Lisa Rhyne

“I strongly encourage and support everyone to come out of any closet you may be living in ~ especially if it is The Metaphysical Closet ~ because it is a new era and it is time to live fully and fearlessly. And yes, I am contributing some of my many truly painful and utterly terrifying stories to Yoko Ono’s ARISING exhibit. Please share this information with anyone you think may be interested. Thanks much!” ~ Lisa Rhyne